How Can Pitchers Ever Be “Elite” If They Take Time Off from Throwing?

The other day, the following comment/question was posted as a reply to one of my articles:

“How does an elite pitcher take 2-3 months off from throwing and stay an elite pitcher? I can see shutting down for one month from any throwing, but any more than that and atrophy and loss of neuro patterns kick in.”

The short answer is, “They just can – and have – for a long time.” I absolutely appreciate the question, and think it’s an excellent one. Unfortunately, high level throwers have shown time and time again that they can do it. I’ll give you a few examples among Cressey Sports Performance guys who just finished the 2014 season.

Corey Kluber (Indians) made his last appearance of 2013 on September 27, and he didn’t start his off-season throwing program until December 9. According to FanGraphs, his average fastball velocity was up from 92.9mph in 2013 to 93.2mph in 2014 – in spite of the fact that he threw 235 innings this year, which is 47 more than he’s ever thrown in his career. Corey’s seen his average fastball velocity increase in each of his four seasons in the big leagues – and he’s taken 2-3 months off from throwing in each of these off-seasons. Clearly, the time off didn’t hurt him, as he’s a very deserving American League Cy Young candidate this year. 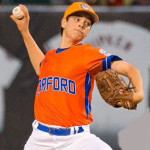 Sam Dyson (Marlins) made his last appearance of 2013 on September 22, and also didn’t start a throwing program until mid-December. Check out his FanGraphs velocity improvement from 2013 to 2014 “in spite of” his lengthy time off in the fall/winter.

Corey and Sam are just a few examples, and I’ve got dozens more. Elite pitchers don’t struggle to stay elite; in fact, time off from throwing allows them to recharge and get their strength and mobility back to prepare for becoming “more elite” in the subsequent season.

With that point made, there are three perspectives I think are important to consider on this front. 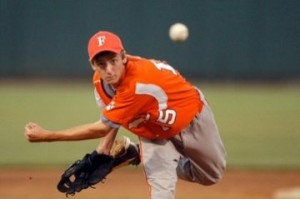 As I’ve written previously in 7 Reasons Pitchers Shouldn’t Do Year-Round Throwing Programs – Part 1 and Part 2, there are a lot of physical adaptations that simply can’t happen (at least not optimally) when an athlete is still throwing. You can’t regain passive stiffness of the anterior shoulder capsule or ulnar collateral ligament. You can’t make significant improvements to elbow and shoulder range-of-motion. You can’t get rotator cuff strength/timing up, or improve scapular control. Trying to fix these things when a guy is always in-season is like trying to teach a 16-year-old to drive in the middle of the Daytona 500; things might get a little better, but don’t expect great results when stressful situations are still in play.

Conversely, we can’t optimize mechanics if a pitcher isn’t throwing; we know that. However, I’d argue that having a healthy, strong, powerful, and mobile athlete is an important prerequisite to learning correct mechanics. Most players are really tired at this time of year – even if they don’t appreciate it (more on this later). Motor learning never happens optimally under conditions of fatigue. I’m all for aggressive throwing programs and meticulous video analysis, but if mechanics and throwing programs are the only tools you have in your toolbox, then you’re like a carpenter who only has a hammer: everything looks like a nail. If you understand structure, function, and adaptation, though, you’ve got a many resources at your fingertips to make an athlete better – and do so safely. An example likely best illustrates this point. I recently saw a minor league pitcher who had an outstanding season: an ERA under 3.00 and a career high of 170+ innings. You’d think a guy like that would be wildly enthusiastic about baseball after such an awesome season, and even want to continue playing in any way possible.

That wasn’t the case, though. He told me that for the first five days after the season, he avoided everything baseball. In fact, he was so worn out on baseball that he didn’t do anything except watch TV and relax for two days. Only after that did he even feel like going for walks with his girlfriend – and he just started up his off-season training three weeks later. This is not uncommon.

It might come as a surprise, but a lot of players are completely “over” baseball by this time of year, particularly if they played for a team that wasn’t in a playoff race, or pitched a career high in innings. Forcing them to continue throwing is a quick way to make them really apathetic to baseball and your coaching. If you need proof, ask any minor leaguer how he feels about being sent to Instructional League. A lot of necessary work happens there, but that doesn’t mean they enjoy it.

3. Athletes might not know the difference between feeling “good” and “bad.”

I’d argue that there are a lot of pitchers who say they feel great at the end of the season, but actually present really poorly in their post-season evaluations. I think a big part of the problem is that we can’t necessarily perceive the issues – mobility and stability deficits – that lead to baseball injuries on a daily basis, as most arm injuries involve mechanical pain. In other words, they usually don’t hurt unless you’re throwing. I’ve seen athletes who claim they feel awesome at the end of the season, but they actually have experienced big losses in range of motion, stability, and power.

To apply this to kids who play year-round baseball, I think it’s safe to say that we have a generation of kids who legitimately have no idea what it’s like to feel good/fresh. They’ve never thrown a baseball with excellent rotator cuff strength or full scapular upward rotation. They don’t know how to effectively create separation because their hip and thoracic mobility is so subpar, and even if they actually had good mobility, their poor core control wouldn’t allow them to make use of it. You could make the argument that it’s a “subclinical epidemic;” we just have a lot of “unathletic athletes” who aren’t willing to take a step back to set themselves up for many steps forward. Build a big foundation and stay healthy, and you’ll always pick up the specific mechanics corrections much easier.

This article was a long response that could have been summed up with the sentence, “Don’t be afraid to take time off from throwing.” The research is very much in support of it helping to keep pitchers healthy, but the anecdotal evidence also supports the notion that it supports the long-term baseball development process, too.

Are you an athlete looking to learn more about Cressey Sports Performance’s services at our Hudson, MA or Jupiter, FL locations? Check out www.CresseySportsPerformance.com.